Fold Along the Line. Guy Ben-Ner 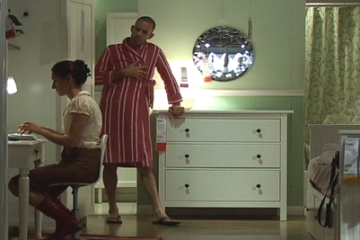 Since the beginning of the 1990s, Guy Ben-Ner (Israel, 1969) has used as his working methodology films in which he and his family are the protagonists.

His works pose a continual negotiation between the personal and relations with others, establishing a permanent dialogue between the two. The artist explores social conventions and archetypes, thus turning his intimate stories into situations that the spectator can identify with.

Many of his videos are inspired by screenplays for films, folk tales and novels. Analysing these literary and cinematographic passages allows him to exploit the conventions of film narrative: how to tell a story, captivate an audience through a tale, sustain a degree of tension and entertainment, and so on. At the same time, he corrupts the magic of fiction by openly showing us the entrails of everything he records, without worrying about revealing the tricks of the trade. The setting for many of his works is the apartment where he lives with his family, coarsely modified to lend his films a low-tech aesthetic. For Guy Ben-Ner, private life is regulated by external narratives that prevail over free choice and authorship.  What does it mean when you discover fictions with a parallel existence in real life? Are we passive readers of our own lives?

By interchanging the roles of actor and director, the improbability of the scenes blends with the real relationships between the characters, beyond the film set. And although they appear to follow a specific script, the questions posed during the process are ongoing, as if they were never sure of how it all ends.

The show at the CA2M includes an early series of videos recorded between 2002 and 2005, all with the common theme of the paternal figure within the family and all of which extrapolate the situation to any other figure that tries to conform to a group. House Hold (2001), inspired by Robert Bresson’s film A Man Escaped, narrates Guy Ben-Ner’s domestic adventure to escape from his son's cot, which is viewed as a personal cage.  In Moby Dick (2000), Guy Ben-Ner uses Melville’s novel about the utopian quest for the great white whale to tell the story of an ordinary family in its everyday environment.

In Wild Boy, another work in the series although not included in this show, the artist does away with the Provence setting in François Truffaut’s film The Wild Child and instead examines moral conventions in the education of his youngest child.  Meanwhile, in Berkeley´s Island (1999) Guy Ben-Ner becomes Defoe’s invention, Crusoe, and tells us a peculiar tale about a shipwreck inside his own home. Sitting atop an artificial sand hill in the middle of the kitchen, he narrates his experience on this unknown island, oblivious to reality around him. On the surface, the artist seems to revert to childhood and an imaginary place invented in spite of the vicissitudes of the world inhabited by "grown ups"; however, his own voice in off narrating the story debunks this theory:  “My island is not a metaphor. It is the thing in itself.”

In Guy Ben-Ner’s works, real settings are combined with moments of comedy, in which the absurd becomes the only means of reflecting on a desperate situation. His simultaneously outrageous and dauntless figure reminds us of a modern Buster Keaton. But like this legendary actor, Guy Ben-Ner does more than simply entertain the audience. In the incongruities of his scripts, truths emerge unhindered. At times, gestures replace words in true slapstick style.

“When I see a balloon, I don’t prick it with a needle to pop it. No, I join in the celebration like everyone else. I even add more air to the balloon to blow it up further. In fact, I blow it up until it pops.” Such is Guy Ben-Ner’s unusual description of how the absurd operates in his work. We deconstruct something when we participate in it, not when we criticise it from the outside. For example, in Stealing Beauty (2007), another of the videos in the show, the artist once again takes the lead role to show us how he feels totally trapped by certain social conventions. In this video, Guy Ben-Ner is seen with his children in a variety of Ikea (the Swedish multinational) show rooms, recording everyday scenes to the astonished gaze of the audience passing through the store.

The need to show us the “making of ” in many of his videos acts as a mirror to explain the idiosyncrasy of our modus vivendi: the stratagem revealed shows us things as they are but which not everyone wants to see.

The work Tree House Kit (2005), probably one of Guy Ben-Ner’s most characteristic videos, is presented as the main installation at the CA2M show. A 4-metre-high wooden tree turns the exhibition space into an artificial nature setting. In the video accompanying the sculpture, Guy Ben-Ner is a shipwreck survivor obsessed with DIY. Lost on his mysterious island – four walls and a rug – he transforms the tree in the scene into various items of furniture and household objects. As in the Buster Keaton film One Week, the video highlights the modern obsession with prefabricated objects and the possibility of compressing spaces to provide them with the greatest possible number of functions. These are stereotyped spaces, each resembling the next, in which everyone has to use his imagination to resist an imposed standard of comfort.

Completing the exhibition are two of Guy Ben-Ner’s latest videos. In Second Nature (2008), presented at the Skulptur Project Münster, the artist swaps the family setting and the genealogy of artificial dwellings for a natural space in which he narrates a traditional tale -  the fable of The Fox and the Crow, conceived here as a TV commercial. In the sequence, the artist introduces us to two animal trainers whom he instructs to animate the action. But far from talking about technical issues, they get into an absurd conversation based on Samuel Beckett’s play Waiting for Godot (1953). Familiar with the devices of the fable genre, Guy Ben-Ner abandons the Aristotelian tradition in favour of Brecht's notion of theatre, in which the different parts of the fable must be able to stand alone from the rest and there is no moral to the tale.

The video I’d Give it to You if I Could But I Borrowed It (2007) is presented on a stationary bicycle. In order to watch it, the visitor has to actively participate through the effort of pedalling, taking on an active role in the narrative. In the first part of the story, Guy Ben-Ner and his children steal various famous artworks in a hypothetical museum -  Zerstorte Batterie by Joseph Beuys, Marcel Duchamp’s bicycle wheel, Pablo Picasso’s head of a bull and Jean Tinguely’s Cyclograveur to create a new version of the velocipede. In the second part of the video, Guy Ben-Ner steals another artwork, this time Rodney Graham’s legendary piece The Phonokinetoscope, in which the artist listened to the same soundtrack while taking LSD and wandering around the Tiergarten in Berlin. Guy Ben-Ner’s version uses the music as the narrative thread for the ride he and his children proudly take through Münster on their wonderful “art bike”.

Although he refrains from adopting a specific stance, Guy Ben-Ner constantly talks to us of ethics and morals, using the same natural ease he employs to deny any particular commitment or personal position on these conventions. He borrows stories not so much out of some fetish or hobby, but as a mere exercise in survival. Guy Ben-Ner’s methodologies are so heterogeneous and his sources of inspiration so different that every genre is valid: from documentary to fiction, from video art to film, any excuse becomes a device for telling a story.