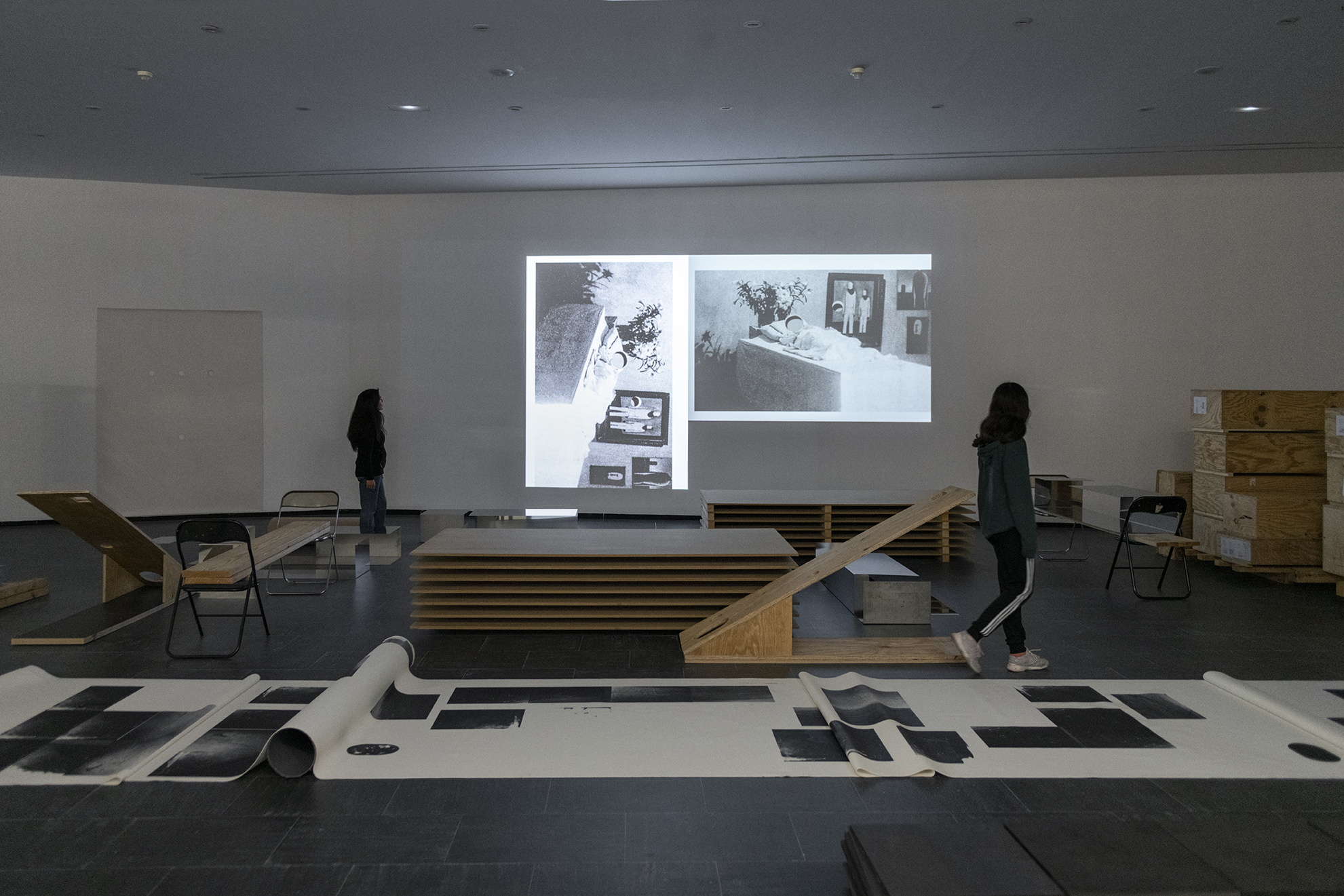 It is a telling sign that this exhibition by Jon Mikel Euba (Amorebieta, Vizcaya, 1967) is his first solo show in an institution since 2003. While this piece of information might lead us to think that he has produced a scant body of work, in fact it has been growing gradually without pause in forms of public proliferation removed from conventional exhibition formats. Over the last ten years, he has dedicated himself to teaching and writing understood as an inevitably potential space for artistic practice: in these discursivities of the body the artist intervenes from within the text so that it is turned into action, like Lawrence Sterne’s Tristram Shandy, in an operation known as metalepsis. This performativity, that necessarily happens outside the text but as part of its reading, has a logical continuity in the essayistic genre that is the exhibition complex.

In 2020, in an installation created for the group exhibition Cybernetics of the Poor (Tabakalera, Donostia; Kunsthalle Wien, Vienna), he conceived a space precisely to receive a text understood as annotation, where, in a number of sculptural devices, Jon Mikel Euba wished to: “first delimit a specific body—mine—and then to withdraw it from the place it used to occupy, thus enabling the incorporation of another one”. The following year, his exhibition at the CarrerasMugica gallery in Bilbao borrowed its title, Animals that Support the Weight of Mysterious Burdens, from David Foster Wallace in reference to a childhood story: “As a child, I was told that the old system once used to create usable paths up a mountainside consisted in loading a donkey with a heavy burden and setting it loose in the direction of the mountaintop. The donkey economizes its energy to the utmost, always taking the most horizontal slopes possible, which, zigzagging, will lead it to the top with the least force possible in relation to the burden it is carrying.” Apocryphal or not, the story elucidates the sculptural praxis he applied to this exhibition, a technique that is prolonged within the exhibition on the third floor of Museo Centro de Arte Dos de Mayo, but in settings created by opposing forces.

These forces are the spatial layouts of the exhibition halls at Museo CA2M, underwritten by a confusing interiority—which has had to adapt over its fifteen years to its exhibition functions and other activities—and a mediated exteriority—a promise of the street that the building unsuccessfully offers through its glass façade. Starting out from this analysis, the zig-zag movement is set in motion, maintaining the context not as a given condition by as a space of production, suspending its contradictions but without resolving them. To this end, he uses different methods: a sensibilization to the image similar to Ignatius of Loyola’s composition of place or the practice of the Feldenkrais method of somatic education, in which the body has to imagine a movement before being able to enact it effectively. In both approaches, the encoding happens first in the aesthetics before the field of the real. That is why his analyses of space gave rise to an extensive series of drawings that posit 3916 speculations on space, a massive flux of desires for intervention or for transformation. Those drawings are forms of active thinking of value in their own right but also guiding archives for the elaboration of the more delimited definitive project.

Many of the sculptures are concrete materializations of some of those possibilities in a series of gestures in the body of the building, akin to exercises of documentation in situ. There are elements of closure that prevent a view of the city, negating the iconic engagement with the outside in order to concentrate on the exhibition halls in themselves. There are also openings at different points, that operate like practicable intensifiers on a human scale, facilitating another form of access where the mediation is from art and not from a remote imposition. The angles of the halls and columns are intervened with obstaculizing elements that limit or channel the flows of energy. Finally, a series of prototypes on paper, called Occlusives, explore combinations of up to ten viable perforations on the walls of the hall: small circular holes as possibilities for movement, for being present, for adding the body, for returning the scale to that of individual experience but also to the metaleptic body of the artist as standard.

The potential performance connects the exhibition hall with the studio, as the place par excellence where the body serves as a unit of measurement. But it is also in the studio where the technical economy of the pieces takes the form of sharing and the process of mounting is also a workshop understood as a form of problematizing, of letting other voices be heard, of negotiating decisions, of demonstrating the openness of possibilities and the non-definitive state of the form that the final exhibition takes. In order for the exhibition space to be productive, it has to be first sown with doubt, and procure a waiting time that is in itself a form of legibility. The conceptual fascination is that of making: the space only deploys resources and tools. This methodology implies a collective enterprise, negotiation and permanent discussion, which is presented to the spectator at a moment of pausing a process that continues apace. That is why the real volume of the materials that have enabled the process of making remain in the space as part of the exhibition: transport crates, packaging materials, fragmented construction elements. For Jon Mikel Euba the exhibition is a space of production and not of representation.

This displaces the conventional notion of sculpture which is underpinned by a commemorative drive: a need to raise an object of memory or to host the emptiness of its absence. This deictic drive, this signalling, is replaced by a transitive form: autonomy becomes negotiation, relationality; the deposed commemoration gives way to formation. Every exhibition hall is a classroom, a space destined for an educational narrative that potentially happens, necessarily performative. The positions for the bodies, the places for being and for staying, are postures of reception: the provisional sculpture in the space is precisely a way of being, not for the statue but for the bodies that can, latently, inhabit its signification. Jon Mikel Euba, like the speculative philosophers of spinal catastrophism—who believe that the present disaster of the environment is a direct consequence of the formation of the brain of homo sapiens as a result of the birth of the upright gesture—seems to question that the vertical position has to be the ideal one from which to contemplate an exhibition.

As the philosopher Gilles Deleuze wrote, the problem of art is not one of meaning but one of use. Among the accumulation of potentialities is the structural, what art does that no other disciplines or technologies of culture can do: sustain contradictions between non-verbal forms to safeguard the complexity of the world … or to defer the solutions and the impulses towards conclusion in favour of a production which is constant yet of minimal materiality, of adjusted reality.

Jon Mikel Euba (Amorebieta, 1967) His work is grounded in drawing, as a procedure, and sculpture, as a program resolved in diverse media. Since the late-90s, he has developed a practice guided by the need to generate systems of production through “economic technique”. This search is a form of resistance that calls for immersion in processes that involve other people and in which the artist plays the role of a mediator or filter. From 2006 on, he developed a series of performances whose results were condensed in the Re:horse series at MUSAC in León (2006), FLACC in Genk (2006), Festival a/d Werf in Utrecht, De Appel (Lecture on Re: horse) (2008), in Stedelijk Museum Bureau Amsterdam (2009) in Amsterdam, Project Arts Centre in Dublin (2009) El Farol Auditorium in Valparaiso (2010), and in Transcoding Re: horse at the Van Abbemuseum, Eindhoven (2010), for which he developed a didactic approach for different participants with whom he collaborates. In 2010, jointly with Txomin Badiola and Sergio Prego, he created the Primer Proforma experimental pedagogical project at MUSAC in León. In 2015, together with the artists Itziar Okariz, Asier Mendizabal and Sergio Prego, he carried out the Kalostra school project in San Sebastian. He is a former director of the master Action Unites, Words Divide (On Praxis, An Unstated Theory) at the Dutch Art Institute in Arnhem between 2014 and 2017. At the same time, since 2006 he has been working on a project focused on writing whose goal is to define a praxis that will evolve into technical theory. In 2017 he published Writing Out Loud, and in 2021 Vulnerario.

His work can be found in collections such as Museo Reina Sofía in Madrid, MACBA in Barcelona, MUSAC in León, MUDAM in Luxembourg, FRAC Poitou-Charentes, France, Ministry of Culture in Madrid, etc.