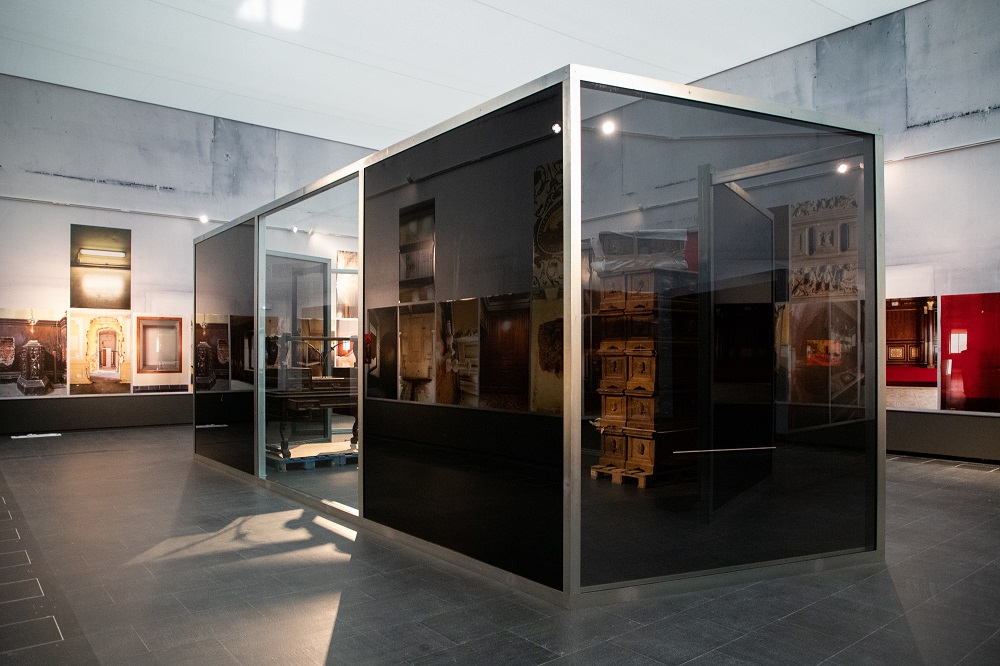 Espejo y Reino / Ornamento y Estado is an installation by artist Álvaro Perdices and curated by María Virginia Jaua. The project – designed specifically for the spaces of the CA2M Centro de Arte Dos de Mayo – puts forward the concept of confronting the idea of the archive with the deconstruction of the notions of State and institution framed within the personal and the historical.

We understand an archive to be the compendium and conservation of a past that has been lost due to the transformation of the institutional spaces responsible for collective memory; on the other hand, we consider deconstruction to be an exercise of questioning, dismantling and critical thought regarding the symbolic languages of representation, which are inherent when it comes to how narratives are read.

Perdices’s work, which he carried out in the exhibition department of the Prado Museum and together with his own artistic practice, led him to express this thought that revolves around the research done on two important institutional spaces of the Spanish State’s recent past; the Salón de Reinos in the Buen Retiro Palace – that for many years housed the Army Museum – and the woodworking workshops of the Ocaña Prison in Toledo.

With this research and the idea of critical thinking at its core, this exhibition for the CA2M is an installation made up of several series of photographs that, by using visual archaeology, shows the dismantling of the Salón de Reinos – that has been recently remodelled – and includes a sculptural ensemble based on the furniture produced at the Ocaña prison, as well as two video screenings. The architectural mechanism via which these elements were constructed were created in collaboration with Estudio Herreros.

With the collaboration of Museo Nacional del Prado.

Álvaro Perdices (Madrid, 1971) studied Fine Arts at the Complutense University of Madrid. In 1993 he moved to Los Angeles to pursue a Master’s degree in Fine Arts at UCLA. He lived in LA until 2012. On returning to Spain, he worked as an exhibition coordinator at the Prado Museum, where he also developed various educational and curatorial projects.

Over the last few years, he has created artistic projects that are linked to the ambience of relationships with the museum. Focusing on the complex web of links between the individual and museums, his work runs parallel to his work with museums and learning environments.

Since the end of the last decade of the twentieth century, Perdices has worked in various cultural and academic institutions ranging from art schools to museums. Based on his experience in these contexts, he has worked at the Twentieth Street Elementary School in Los Angeles, the Jakintza ikastola in San Sebastian, the Ahmed Zabana Museum in Oran (Algeria), the Espai d’Art Contemporani in Castellón, the Prado Museum and, recently, an artistic training project that recreates the learning process outside the schoolroom in the natural environment of a forest in Mallorca.

The premise of the artist’s research focused on a search for – or construction of – places which, like a crack, allow other behaviours in; a certain outlawlessness and a degree of disobedience that from a personal standpoint suggest a break with and a questioning of established norms, behaviours and visual canons by allowing the peripheral, the hidden and the ‘institutional underground’ to be experienced.

She has created and collaborated with several editorial projects related to art, literature and culture. She was editor of the magazine Líneas de fuga on world literature and exile at the Casa Refugio Citlaltépetl; editor-in-chief of the magazine Estudios Visuales; and was at the helm of the online magazine Salonkritk – on theory, critical thought and cultural analysis – from 2008 to 2016.

She has collaborated with public and private cultural institutions in Latin America and Spain for which she has curated exhibitions, designed and directed workshops and given seminars and lectures on contemporary image analysis, art criticism, the relationship between the voice, writing and image, among other topics associated with the analysis of contemporary culture.

She works with a range of artists, and it is precisely on this interweaving of disciplines where most of her thought and work is focused. She is part of Écritures de la modernité, a work and research group at the Sorbonne Nouvelle, and since 2016 runs the magazine  Campo de relámpagos on critical thinking.