POSTURE AND GEOMETRY IN THE ERA OF TROPICAL AUTOCRACY ALEXANDER APÓSTOL 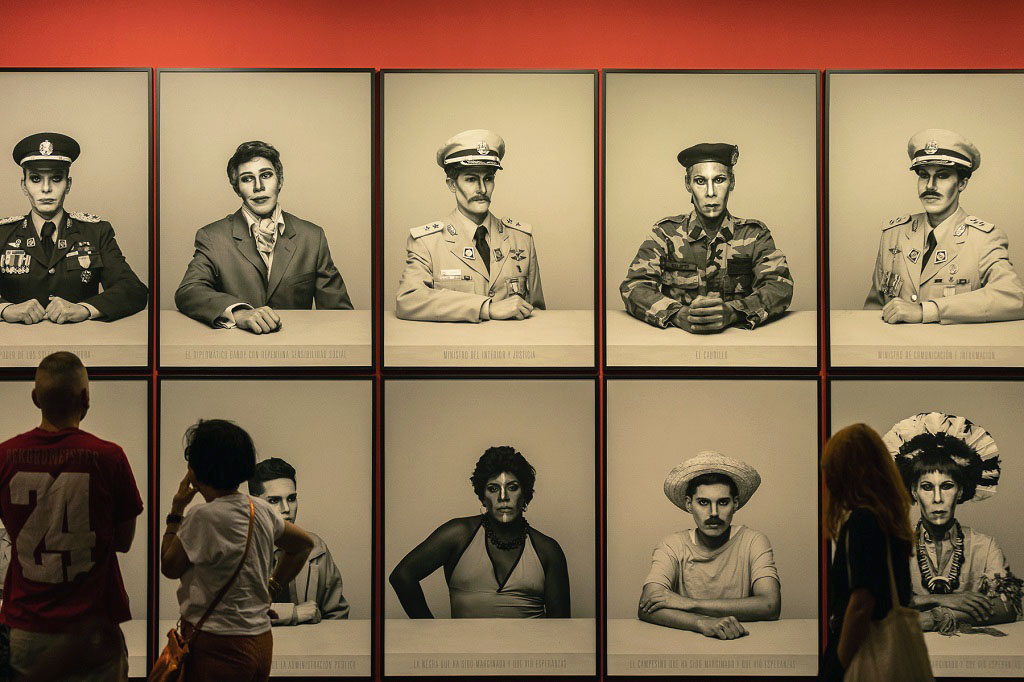 Alexander Apóstol’s projects build a critical analysis of the aesthetic processes of political construction in his native Venezuela. Like other artists from his generation, who started to exhibit their work in the early-nineties, Apóstol (Barquisimeto, 1969) used the tools of photography and video as key elements in a critique of representation, in which the visual culture produced by power and the mass media—with their stereotypes, clichés, concealments and propagandas—is co-opted as the raw material of the work of contemporary art.

The impact of his work is predicated on its singular two-pronged contextualization. On one hand, a focus on the way in which Western modernism transplanted to Venezuela managed to take hold as an aspirational mechanism, both for the working class as well as the economic elites. The rapid industrialization that went hand-in-hand with the proliferation of the new oil-based economy ran in parallel with a national project which embraced the modern movement as a model to emulate without questioning any of its contradictions. The forced translation to the local context and the vernacular thrust of this modern drive was the work of representation of various generations, of successive governments and elites, promoting a propagandistic ideal removed from the social reality that had its aesthetic manifestation in successive forms of geometric abstraction. Apóstol operates on this whole legacy not just as a backdrop, by re-politicizing its constructivist roots, but as a figure, returning to the painterly object itself, to colour field painting.

The second crucial aspect is the concern with the way in which political powers have helped to construct a single model of national identity for the production of subjectivity in Venezuela. The development of the country in the seventies, in parallel to the industrial conversion with the rise of oil drilling that was to earn it the name of Saudi Venezuela, was cut short by the social crisis which has been ongoing since the late-eighties. Apóstol gives material consistency to the local memory displaced by the autarchic regime of the Bolivarian Republic and its divergence with History, in the form of bodies subjected by those powers and dictatorial control systems. The epic national identity that cuts across the contemporary era in the country is rebuilt once and again in different series of work, to demonstrate once and again its consequences on people’s lives. The questioning of the mechanisms of production of identity basically involves a decoding of representations of gender, ethnicity and social class, and a legitimization through images of what has been relentlessly deprived and ignored because of its minority condition.

Apóstol’s work embodies the Venezuelan political discourse, but from below. Néstor Perlongher argues that over-adorning language is a dissident act that drags high culture down into the mud and mixes it in with the culture of non-conformity. The rejection of heteronormativity, high-camp drag, or a trans becoming — they pave the way for a countercultural becoming. As Cecilia Palmeiro notes (in “Fags, Cops and Guns: Néstor Perlongher and the last Argentinian Dictatorship”, 2011, p.22), in a paragraph that could well apply to Apóstol: “A mounting of the voice, when combined with the lumpenisation of language, produces the most violent weapon for trench warfare: a backbiting, pissed-off language that serves as (...) joyful revenge for all the pain and violence, which is rebutted with an even more furious and destructive violence, and with pleasure (...). The eroticisation of politics and the politicisation of the body come together in the construction of a war machine: a poetry that becomes a machine with extreme bodily practices and with a queer politics that places the nomadism of homoerotic desire — its voluptuousness and excess — at its very centre.”

This mid-career survey is the artist’s first museum exhibition in Madrid, the city where he has lived since 2002. The nine works on view, some consisting of large suites of photographs produced for this show, overview his output over the last two decades—from 2005 to the present. The exhibition is conceived as a multi-faceted visual essay, focusing precisely on the intersections and connections between works that beforehand had been exhibited individually.

Produced in collaboration with: