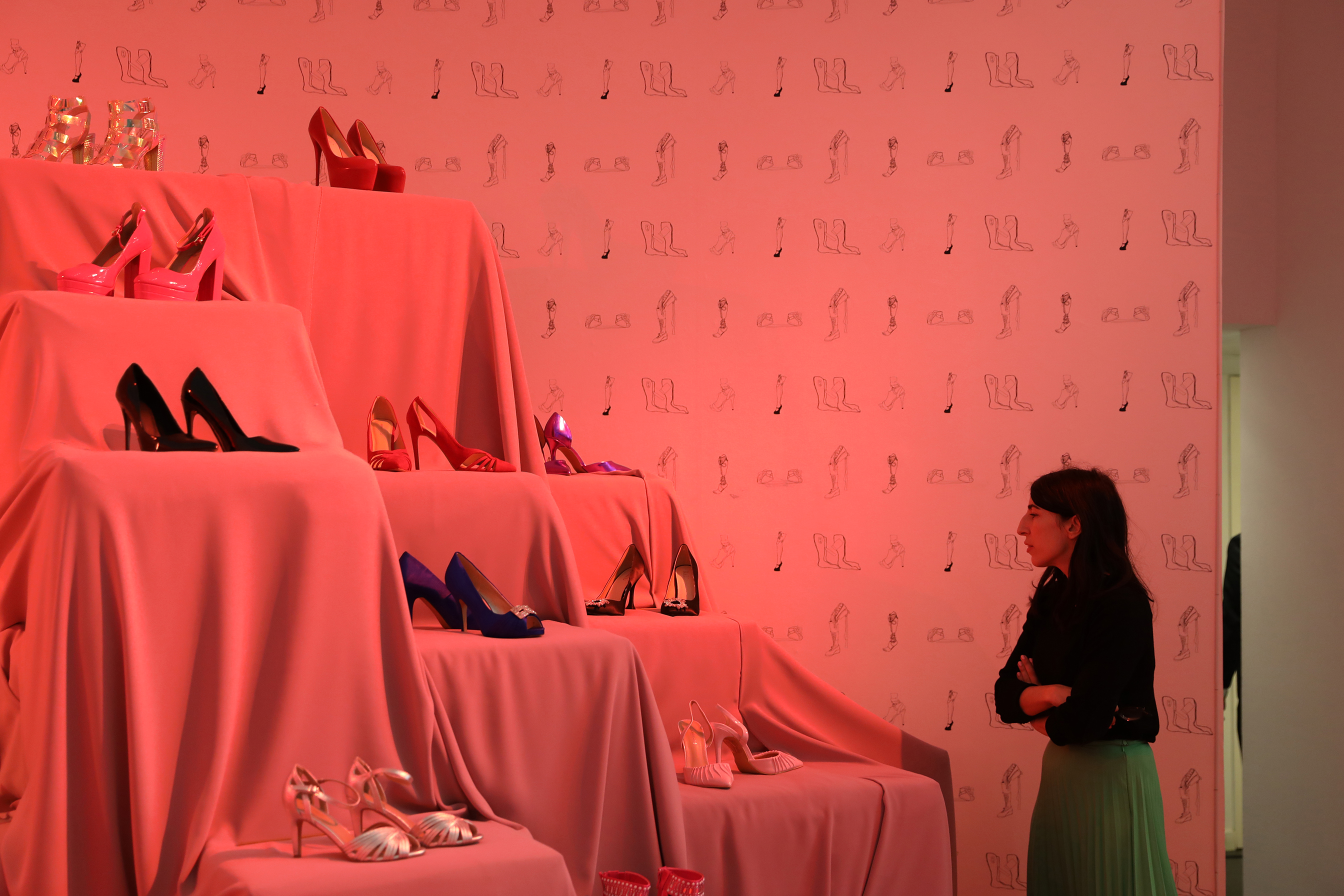 Fantasy, high heels, the colour pink, resting, desire, prostheses, accessibility, being the norm perverting the norm: this is the world of Costa Badía (Madrid, 1981) that has taken over the ground floor of the Museo CA2M.

Badía’s recent work uses criticism and tenderness to subvert conventional social mores. It is not the first time that disabled artists and activists have challenged the way in which society views disability, attempting through pity, aversion, and hostility to classify those rebel bodies as second class. Conscious of her place in the world as a disabled woman, Badía gazes back at the world in a playful attempt to alter the perspective: now it is she who flirts with, disrupts, and explores normalcy mores, rituals, and fantasies.

High Heels, Foot, and Cane is a site-specific work created especially for the entrance staircase at the Museo CA2M. Stairs, those ancient architectural structures, are impossible to navigate for certain bodies because of their lack of accessibility; for other bodies, it is one more access for two floors in a building. In certain contexts, they take us beyond: to the sacred word of the Church, to the apex of a pyramid, to the stage to collect an Oscar, to a political speech. At the top of the stairs, chosen beings descend to Earth in their gala dresses, with ultra-high heels, bodies sculpted by the rules of Vogue magazine, oozing elegance and grace. Smiling, they greet onlookers with their eyes and rest their hands like feathers on the two impeccably dressed men accompanying them, as Norma Duval taught us.

On 26 January, Badía descends the stairs like a diva. Unlearning the norms of impossible spaces—for her, staircases and the femininity pushed by glossy magazines—she creates new norms rooted in fantasy and her own desire. Perhaps now, the eyes will work to recognize what seems illegible and understand what seems strange. When the body is dissident, the only standard is one’s own norm. To descend the stairs, Badía chooses two handsome, seductive men to support her and has had a sexy dress made to measure. She is barefoot because she can’t wear high heels: no matter, because in the space under those same stairs, she has built a refuge, again made to measure, where she becomes the Vitruvian Costa. She fills it with high heels she has chosen herself, in size 39, her own shoe size. There's also a chair so we can try on the shoes, handle them, have a little fun and rest for a while, because museums are a place for sitting down.

By working with rites and objects associated with femininity, such as a high-heeled shoe and the desire to be a diva, Badía reiterates her non-place and halts in the trajectory. Her intention was never to become the normalcy itself, or to negate it, but to investigate what lies between those two points: living a fantasy through her own body, dismantling the fixation with that ultra-normal and sometimes impossible destiny for a body considered to be perfect, going beyond the norms of gender. As soon as we enter the museum, High Heels, Foot, and Cane invites us to take a rest and fantasise about shoes we can’t wear, to try on the prostheses we desire to support us, and to reflect on whether our trajectories are accessible, on the different experiences of getting around, on how we got here

I am an artist and a cultural mediator. I graduated with a BA in Fine Art from Universidad Complutense de Madrid where I went on to do a postgrad in Art Education in Social and Cultural Institutions. I am currently working in the Education Department at Museo Nacional Centro de Arte Reina Sofia in Madrid, coordinating accessibility, with an emphasis on cultural mediation and programming.

My work as an artist is focused on error validation, the challenge of stereotypes of beauty and of behaviour. I seek out alternative paths, investigating the coexistence between normative people and diverse bodies. I have taken part in group shows like Fundación ONCE’s 7th and 8th Contemporary Art Biennial, carrying out performances at MNCARS and Museo Nacional Thyssen-Bornemisza, and I have had a solo show at Instituto de las Mujeres. I have also given lectures on art and disability at symposiums and seminars in institutions such as Trueque Institucional Centro d´Art Santa Mónica, La Panera, Matadero Estudios Críticos, among others. I am the founding director of La Tullida Gallery, a place for the meeting between art and functional diversity.

Júlia Ayerbe is an editor, curator and researcher. Her production is focused on issues related with functional diversity, feminism and editorial practices. In Brazil she has worked with institutions like Pinacoteca de São Paulo, Casa do Povo; Sesc; Prêmio Indústria Nacional Marcantônio Vilaça; Museu da Imagem e do Som, among others. Together with Laura Daviña she founded the independent publishers Edições Aurora / Publication Studio São Paulo (2014-2018). Since she moved to Madrid in 2017, she has studied a master in the history of contemporary art (UCM/UAM/MNCARS) and has worked on projects for European institutions like Galerias Municipais in Lisbon; Haus der Kulturen der Welt (Berlin); MNCARS; Sala de Arte Jóven; Tabakalera; among others. She is currently preparing a PhD thesis in the History of Art department at Universidad Complutense de Madrid (UCM). 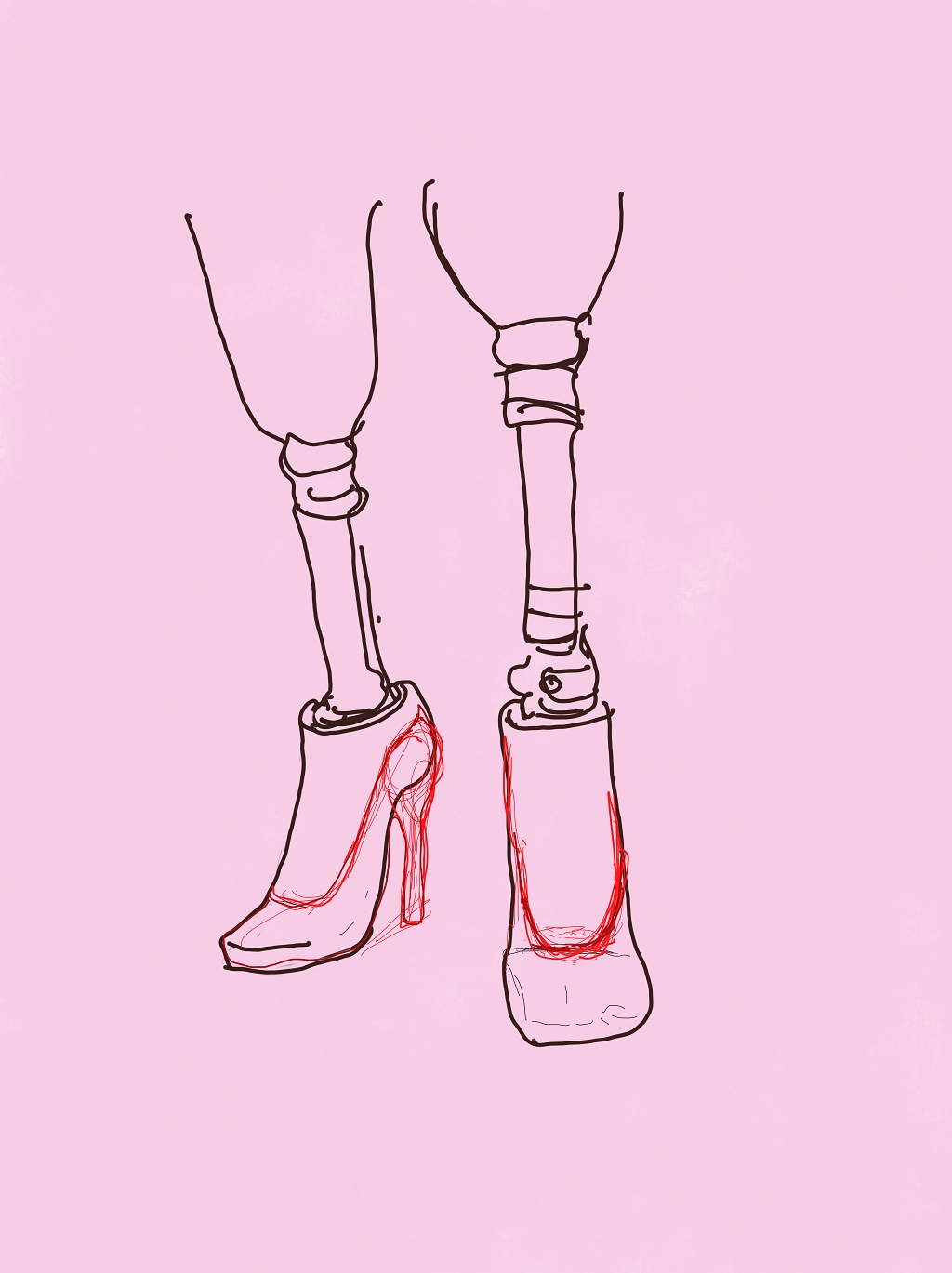