ELENA ALONSO. IN THE CARE OF THE SMALL SHADOWS 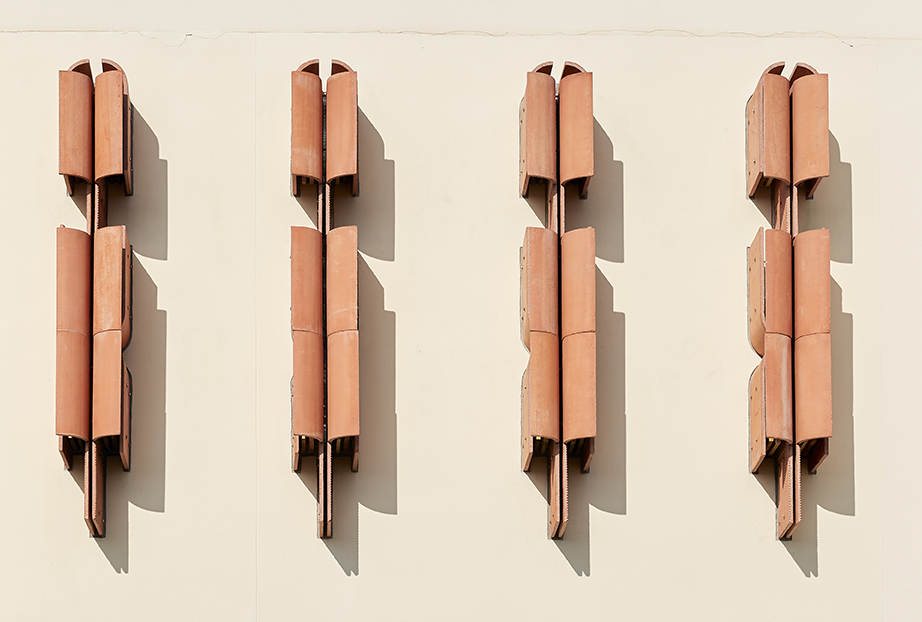 "I imagine a place that can never be cleaned. A hole, a nook. A blind spot to cleanliness. A cubicle that is open yet inaccessible to human hands, where any trace of events can be easily deposited but are almost impossible to retrieve. A gatherer. A space of uncontrollable accumulation. A sculpture, perhaps? Elena Alonso (from the preparatory notes for this project in 2019).

Al cuidado de las pequeñas sombras (In the care of the small shadows) is a site-specific installation created by Elena Alonso for the terrace of the Centro de Arte Dos de Mayo Museum, consisting of four sculptures conceived as a bat shelter. The structures are designed to coexist with the terrace’s vegetable garden - a space tended to by the local community throughout the year and a centre for collective reflection on food autonomy and healthy living – and to provide continuity not only in terms of space, but also with its programme on the ecological principles of coexistence between species. Each pieces is organised as an architectural structure consisting of holes, like a conglomerate of small openings, and a multitude of narrow chambers, where these new Museum "users" can live. Built using pigmented concrete, wood and guano, the four Elena Alonso sculptures have a modular design, with a series of curved plates forming a skin-like protection. Inside, is a series of hollows and narrow chambers for the Pipistrellus or dwarf bat. Much like pavilions built to scale, its shape lends itself well to the curved development of the acoustic waves, to the navigational echoes produced by the bats as they fly, imperceptible to the human ear.

In Elena Alonso's earlier works, her sculptures have undergone important transformations in terms of experience. In Guided Visit (2017) at Matadero Madrid, the sculptural elements were a tactile architectural structure that channelled the path of its visitors, a continuous beacon for people travelling through space and time. In Craving (2018), the arch conceived for Wanting to seem like night at CA2M is an architectural threshold, a passage from one state to another, with an erotically charged feeling of passing through a highly significant decoration. In the care of the small shadows she goes one step further, creating a sculpture that impacts the visitor’s experience of the architectural space. On a small scale, its interior houses animals, i.e. it has a utilitarian purpose far removed from traditional architecture. On a larger scale, the choice of colour brings the museum’s exterior inside: the ceramic red that tinges the landscape of Móstoles urban development clings to the terrace wall as a sign of kinship. The curved plates give it a volatile appearance, as though perched on the façade just for a moment, a symptomatic sign of the bats' nomadic nature. This installation evokes the character of collective flight that has temporarily perched, yet is stable and permanent - that is to say, the very paradox of a public institution dedicated to contemporary art.

Bats inhabit the city at night: they already exist in the natural environment, protected for their fundamental contribution to the biome. In fact, these animals’ way of life is very curious as they hardly ever nest in the same place twice, meaning that their passage through these shelters is temporary and everchanging. Their new living quarters, designed in consultation with biologists, will provide them with an adequate protected space for their mating and breeding cycle, thereby protecting a currently vulnerable species. These domestic architectures deal with other forms of life considered to be “less important” and, therefore, not usually given much attention by cultural institutions. They also claim that the museum belongs to a much larger ecosystem that goes beyond just the human aspect: the cultural aspect also influences urban continuity. Just as the city provides experiences for human bodies during the day, it is inhabited in an entirely different way at night. Accommodating new nocturnal coexistences extends our possibilities of experiencing, and thus continuing, research into night studies and the cultural productivity that darkness brings.

While Elena Alonso’s earlier pieces have involved architecture and its human use, here she broadens her range to include the habitats of other species. She explains that "this piece maintains a clear link with the series Design for a voluptuous body, with the image of a body that is neither architectural nor human, undefined and sensually-charged, that plays with tile-like skin that is both warm and tough.” This project is part of a series of specific artistic interventions carried out in and for the spaces of the Centro de Arte Dos de Mayo Museum. Its permanence beyond the ephemeral nature of temporary exhibitions aims to give long-term continuity to the project, while introducing a new way of generating contemporary heritage in the institution, unlike traditional collections. In addition to Elena Alonso, Dora García, Olga Subirós and An Wei Lu Li have also developed projects.

Elena Alonso (Madrid, 1981) works mainly through drawing, associated with the methods and grammars of other disciplines such as architecture, design and craftsmanship. Alonso approaches the practice of drawing as a thought process that produces a new kind of ambiguous abstraction, overwhelming and, at the same time, extremely precise. This practice is present in her drawings, sculptures, installations and site-specific projects, producing a body of work that, although in constant reformulation, maintains a profound internal coherence. Her neatness and meticulousness contrasts with the manual and artisanal quality of her processes and finishes, giving her pieces an unexpected warmth and haptic and emotional wealth when seen up-close. The tension and balance between opposites; familiarity and strangeness, structural or ornamental, functional or playful, and the frequent allusion to the body, refers to issues related with our feelings towards the environment and the unconscious relationship we establish with the codes of visual representation. She has had solo exhibitions at Fabian Lang Gallery (Zurich), Abierto x Obras (Matadero Madrid), La Panera Art Centre and Water Museum (Lérida), ABC Drawing Museum (Madrid), Galería Espacio Valverde (Madrid) and the Autonomous Community of Madrid’s Youth Art Hall. Her numerous official recognitions include: the Madrid Culture Prize in the category of Visual Arts 2018, the Madrid ARCO Prize 2018, Generaciones 2013 awarded by La Casa Encendida, the 23rd Circuitos de Artes Plásticas Prize 2012, and the Matadero Madrid Contemporary Creation Grants (2011). 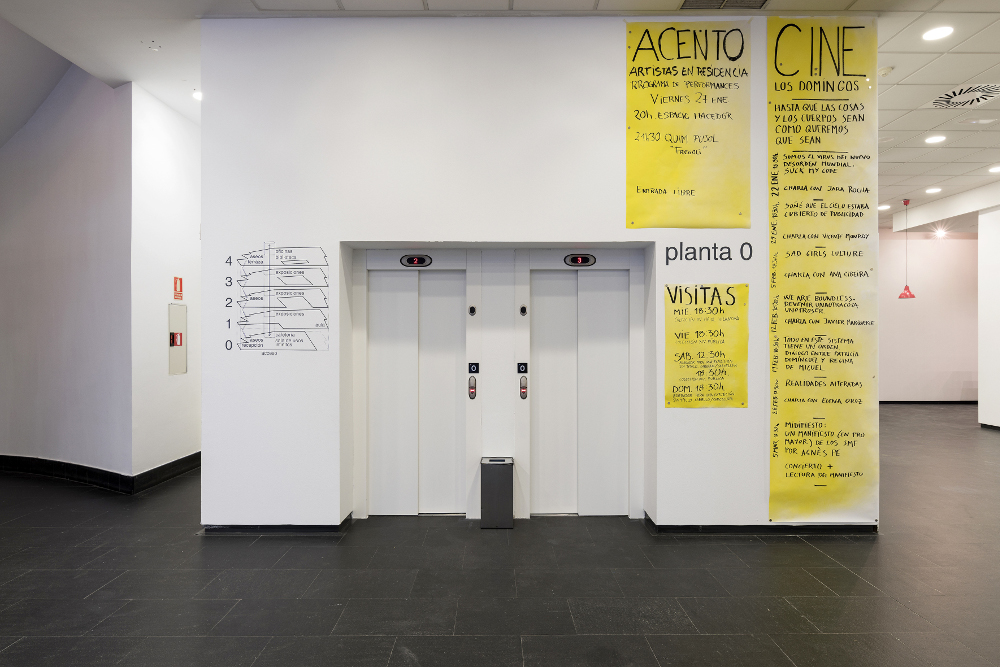 Among the various artistic interventions contingent on the exercises in architectural acupuncture begun in autumn 2016 at CA2M, Dora García has conceived an exhibition which takes the form of new signage in a permanent intervention that involves all the art centre’s various spaces.