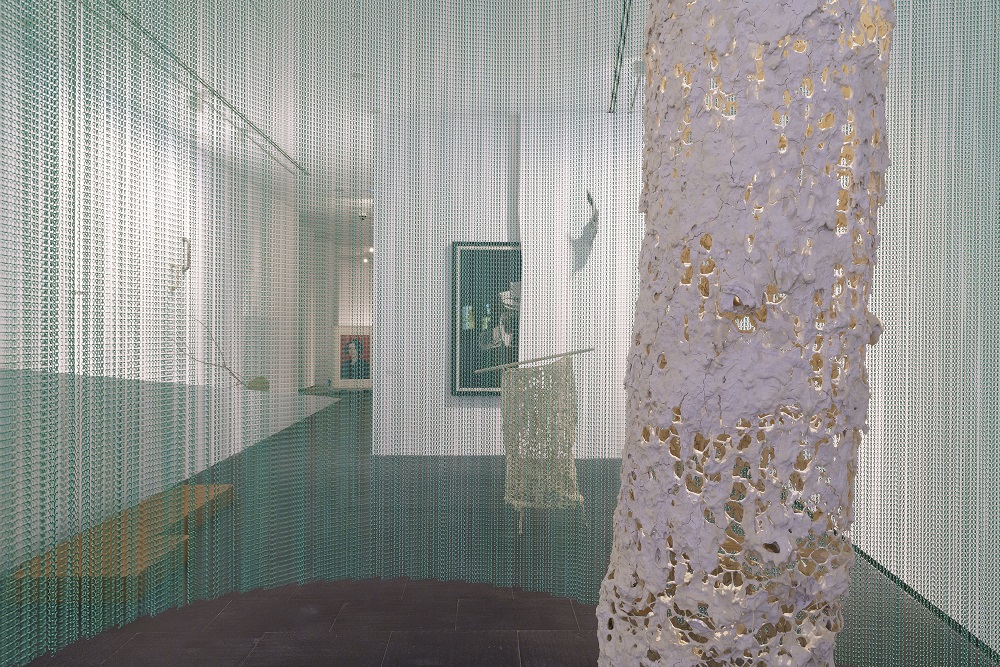 Y.A.: Do you have anything to add?

By supposing that logic makes chaos natural and order artificial, we are positing a physical and conceptual experiment of what an exhibition space is. Syntactic Tactic. Diego Bianchi is an exercise in disassembling. A white cube, a neutral space, windowless, consisting of white walls and a source of light shining from top to bottom, becomes the raw material for a plausible disassembling. Based on an absence of pre-defined moulds and behavioural guidelines, this project highlights a number of exhibition practices.

To do this, we suggest alternative ways of organising – the display, which is seen as a hybrid framework, is both an architectural-sculptural support as well as a work of art. A projected exhibition environment, which is not revisionist or retrospective, where prints, collages, objects, sculptures, paintings and photographs are not observed solely by being viewed. The framework of the project – whose content is simply a series of artworks – functions as a language of gestures from which Diego Bianchi has created a series of pieces. In some cases, these house works from the Collection. It is a loop of uses and shapes, whose only goal is to make the oneness between proper names and the symbiosis between artworks the structural core of Syntactic Tactic. Diego Bianchi.

This exhibition is part of the cycle: Dubbing the Voice. Artist readings of CA2M’s holdings

Centro de Arte Dos de Mayo regularly invites artists to give their own personal readings of its collections in exhibitions that are both a sample of its holdings as well as an undercover solo show of their own work. Seen from the optic of an individual art practice, a collection is removed from academic narratives and exhibition conventions and creates disruptions, unforeseen interpretations and new ways of speaking that add to the work of radical imagination which is what characterizes any contemporary art institution. In this way, the museum’s holdings are not viewed as an end in themselves but from the potential they afford for production. Each exhibition will be built from the same collections, intuiting narratives of future forms of collecting through their differences and resonances. As exercises in ventriloquism over the museum in which the speech act belongs to the artists that are its very raison d’être.

Bianchi studied graphic design at the University of Buenos Aires and became actively involved in art practice in 2002. He took part in Pablo Siquier’s workshop within the programme of visual arts workshop C. C. Rojas-UBA-Kuitca 2003-2005 (Buenos Aires); and The Skowhegan School of Painting and Sculpture (Maine, 2006) and also in the Locust Project (Miami, 2008).

Since 2009 he has taught in the Artists Programme at Universidad Torcuato Di Tella giving workshops and annual symposiums. He has been an invited guest teacher at SESC São Paulo, Brazil and at HFBK in Dresden, Germany.