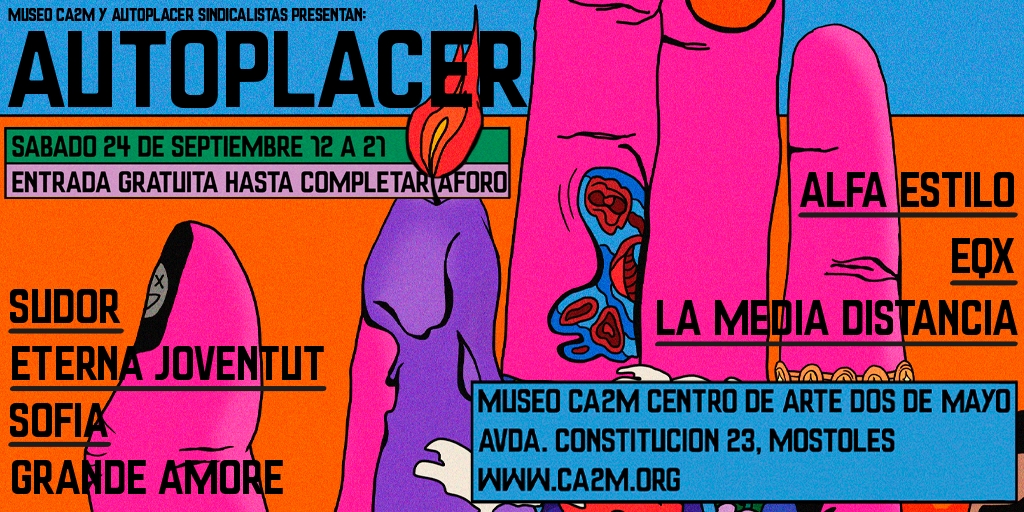 Autoplacer, the music and self-publishing festival held at CA2M for the last thirteen years, is back again in 2022, on Saturday 24 September. Like previous years, the Autoplacer/Sindicalistas collective will bring to Móstoles a selection of groups from the underground Spanish scene in an event which has been defending the inclusion of contemporary forms of music in institutions for over a decade, lending visibility to new sounds and their truly independent processes of publishing, production and diffusion.

This year’s event has scheduled punk veterans Sudor, nouvelle garage melodies from Eterna Joventut, Galician energy with Grande Amore, razor-sharp dream pop from Sofía, old-school pop by La Media Distancia and the techno meets post-punk head-on clash of Alfa Estilo from Valencia. And alongside them, making their debut at Autoplacer are EQX, the winners of the Autoplacer 2021 Rough-Cuts competition, with their brand of disruptive avant-pop.

Autoplacer 2022 has also set aside a section dedicated to electronic music curated by Mosul Mosul in which various DJs and a live set will outline a musical path through afrobeat to witch house, passing through dark techno and trance.

Besides there will also be various invited projects in the field of music and editorial self-publishing.