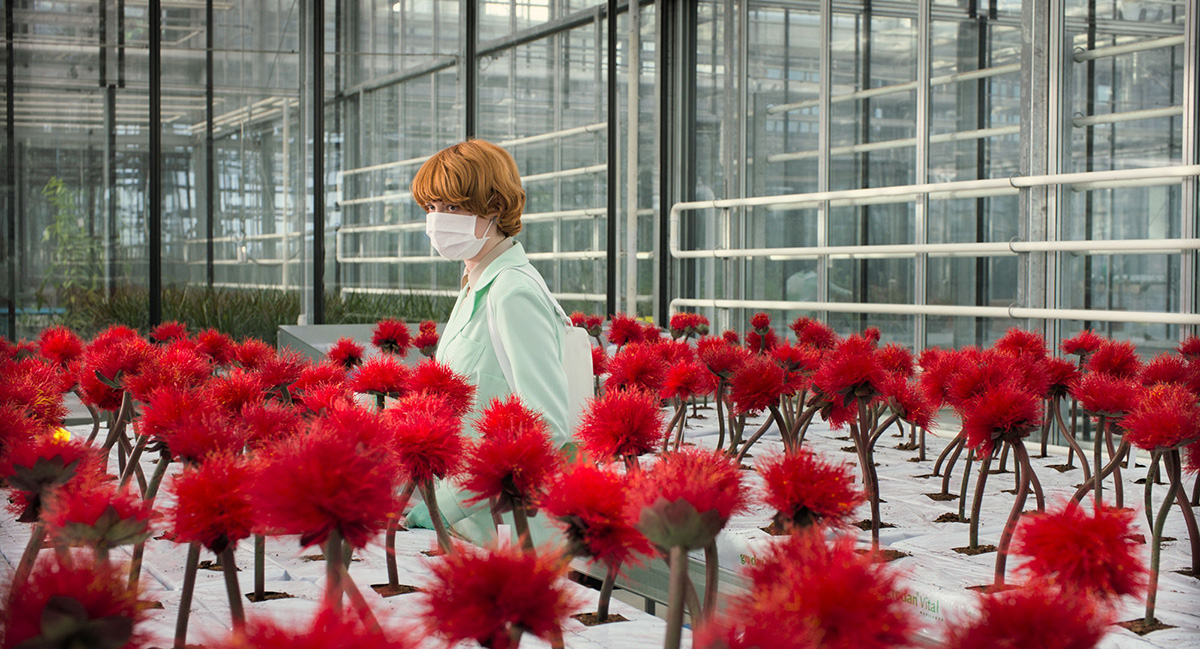 Various authors, whether from the perspective of science fiction literature, like Octavia E. Butler, or contemporary feminist theory, like Donna J. Haraway, advocate the need to overcome certain concepts that condition our contemporary understanding of the world, such as the Anthropocene, and to propose other alternatives, like the Chthulucene, in order to rethink a relationship between species that leaves behind the primacy of the human being as the centre and measure of all things and explores the potential of this relationship to generate new ways of life and possible new more sustainable and solidarity worlds for all species that inhabit it, that allow us to survive the current situation of climatic emergency. From Haraway’s notion of “companion species”, this film season wishes to examine how cinema—understood as a popular manifestation of contemporary anxieties—explores the relationship between species and the human being’s relationship with their environs from various optics; some more catastrophic and others more hopeful, in consonance with Haraway’s vision.

The cult film Phase IV, a canonical example of the apocalyptic sci-fi movie, introduces us to a dystopia in which ants develop a group mind and consciousness of their power and take over control of the Erath, forcing human beings to adapt to the new civilization in which both species have to live together. On the other hand, Soylent Green, another classic sci-fi movie, and a visionary example of the destructive effects of climate emergency, takes a look at the capacity of the human being to destroy the environment in which the Earth must survive.

From a less catastrophic, although no less unsettling perspective, Little Joe reflects on the capacity of science to force this collaboration between species through genetic manipulation and how its form of perverting the course of nature means that it does not always serve human purposes in the way it was intended. The purported supremacy of the human species is brought into question when the modified plants overturn the relationship of power and find ways of surviving that make use of the needs of the people who created them.

Meanwhile, The Shape of Water, Border and Gunda offer gazes that anticipate a less-human oriented future with more interspecies collaborations. Gunda borrows the narrative and formal structures of the documentary to follow the daily life of a pig, two cows, and a one-legged chicken, reminding us that we share the world with millions of different species that deserve to be taken into account and appreciated by us within their own environs, with their own everyday routines and with the same compassion with which we observe ourselves. Border takes a look at how we construct a non-human identity in contemporary Finland and how to develop networks and structures for coexistence between two species—humans and trolls—despite their shared disturbing past. Finally, Guillermo del Toro’s The Shape of Water is a melodrama telling the love story between a woman and an amphibian man, opening the door to a relationship between species like those told by Octavia E. Butler in her sci-fi stories. In conclusion, this film season wishes to offer and explore ways in which film imagines us, how it thinks of other species and our relationship with them and thus anticipate the various worlds in which we will have to live.

Jara Fernández Meneses has curated film seasons for institutions like MNCARS and Cruce, and formed part of the programming team for Cineteca for four years and is a former member of the selection committees for the Documenta and Animario international festivals. She has written film reviews for Cahiers du Cinema. España/Caimán. Cuadernos de cine, cultural reviews for Serie B and has taught film classes in Kent and Exeter universities in the UK and at the Carlos III university in Madrid. In her free time, she likes to deejay vinyl records of black music and to play dominoes.

Estrella Serrano Tovar has worked in institutions like MNCARS, AECID and the Cervantes Institute. Naturally curious, she enjoys learning new ways of interacting with culture and art, understanding relationships with neighbouring communities as a key part of her work and trying to connect with people with shared interests to undertake new projects. She is the head of the Education and Activities department at Museo CA2M since 2020.

Loosely based on the science fiction novel Make Room! Make Room! by Harry Harrison, Fleischer’s film depicts a dystopian future set in New York in 2022 when the climate emergency and overpopulation have led to shortages in natural resources and have left humankind on the verge of extinction. The rich still manage to live comfortably while the poor eat a highly processed food stuff called soylent green. A police detective has to investigate the murder of one of the board members of the corporation that produces soylent green

With exquisite black and white cinematography and a narrative structure in three parts, the veteran documentary director Viktor Kossakovsky shows us the everyday life of Gunda, a sow that has just given birth to little piglets, two cows and a one-legged chicken, focusing on the little details of the world in which these farm animals live, their habits and fixations. In this way, Kossakovsky constructs a visual essay in which our fellow species are given the spotlight, presenting us with a world in which humans are not necessarily always at the centre.

The only film directed by the iconic graphic designer Saul Bass, which has gone on to gain the status of a cult classic, is devised as a false documentary that explores the capacity of ants to take over control of the Earth when they become conscious of their power, forcing humans to learn to live with them if they want to guarantee their survival.

Tina is a customs officer working at the Finnish border with an incredible ability to smell guilt on anyone trying to bring anything illegal across the border. Her odd physical appearance provokes rejection and causes her to be socially isolated. However, when she has to examine Vore, a person who looks a lot like her, her detection skills are deactivated, even though Tina knows that he is hiding something. Somewhere between fantasy and existential melodrama, Ali Abbasi’s second movie won the Un Certain Regard award at the prestigious Cannes film festival in 2018 and won international critical acclaim for its ability to reformulate the premises of film genres to surprise the audience.

Alice is a genetic engineer of plants who creates a flower which can make its owners happy, but is sterile. Disobeying the rules of the company for which she works, Alice takes home one of the plants and calls it Little Joe. Soon she realizes that Little Joe is looking for its own way of pollinating with disturbing consequences.

In Baltimore in 1962, during the Cold War, Elisa, a cleaner who works in a high-security government laboratory comes across an amphibian man who is being secretly kept under study after being discovered in a river in South America. Like a dark fairy tale, Guillermo del Toro tells the story of the unusual relationship between the two, and their struggle against oppressive forces. With the exquisite mise en scène that characterizes del Toro’s films, The Shape of Water explores the particular personal universe of the Mexican director: how to use the fantasy genre to make films with strong political content.