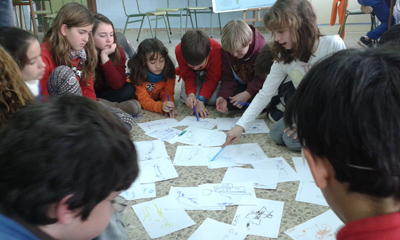 For the 2015-2016 school year the El Banquete group and the pupils from sixth year undertook the collective construction of a pyramid in a corner of the Juan Pérez Villaamil public school in Móstoles. Its mission was to generate a space that would afford other ways of inhabiting and rethinking utopia. The pyramid was built as a possibility for establishing other orders, a space of fluctuating collaborations in which to build and rebuild.

For the current school year of 2016-2017, a new group of pupils from sixth year will be in charge of the construction and deciding on its use. Once again this year, El Banquete will carry out a project at the school in which play will be given a transformative role, giving students an opportunity to adopt roles that will open up processes of reflection on identity, territoriality, the public sphere, autonomy, power, negotiation and disobedience. The project is underpinned by an interest in generating an autonomous and self-managed pedagogy from a position of conflict, at once creating a space of friction within the educational institution, where pupils will take decisions collectively for the self-construction and self-management of the space.

LAlejandría Cinque, Raquel G.Ibáñez and Marta van Tartwijk are the members of the El Banquete research and creative group which develops projects related with everyday experience as an artistic value. Their projects are addressed as playful appropriations and subjective experiences that wish to act as triggers for reflection, critical thinking and individual empowerment.